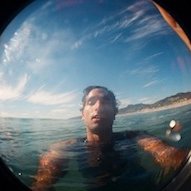 Daniel grew up in South Florida near the Fort Lauderdale area.  He went to the University of Southern California and studied Biomedical Engineering as an undergrad, choosing this major initially because he was considering med school after college.  He quickly realized he wanted to work on environmental problems, but opted to stay in the major because of the broad scope of the coursework.

After doing some undergraduate research at USC, one of Daniel’s advisors introduced him to Jim McWilliams in the AOS department around the time that Daniel was applying to programs for grad school.  Daniel realized his own research interests aligned with a specific problem Jim wanted to look at after starting a dialogue with his future advisor during the application process.  This, along with Daniel’s desire to stay in Southern California, led him to begin the AOS program in the Fall of 2012.

The AOS department at UCLA is relatively small, and Daniel notes that its size provides for a great environment.  “I know everyone in the department,” he says, adding that AOS has “a great communal vibe where everyone socializes with minimal effort.”  He also points out that the broader UCLA campus has a strong commitment to sustainability, a philosophy that is at the heart of numerous student groups, departments, courses, and research at the university.  “As someone who wants to work on these types of problems in the future, I have been able to embed myself into some of these programs,” Daniel explains.  One program in particular, the Leaders in Sustainability Program coordinated by the Institute of the Environment and Sustainability, has attracted Daniel and a handful of other AOS grad students since it began in 2010.

Students in the AOS department have a broad range of academic interests.  For Daniel, those interests revolve around environmental policy, from environmental law and economics to urban planning and social psychology.  And what’s it like as a grad student in Los Angeles?  “I love living in LA,” Daniel writes.  “No matter what your personality or proclivities, there are people and areas of the city that you can connect with.”  Having lived here for seven years now, he says he still finds himself exploring new parts of the city’s diverse neighborhoods and cultures.  Beyond his academic interest in the ocean, Daniel also surfs on a weekly basis almost year-round.

Daniel’s background was slightly unconventional, but Daniel explains that it prepared him well

in that it gave him a good technical skill set.  A solid foundation in math, computer science, and all facets of science (physics, chemistry, biology) was the crucial coursework for Daniel’s success in the program itself.  However, Daniel adds that “the best preparation came from seeking out and working in three labs while at USC,” where he experienced wet lab work as well as large data analysis work that involved computer coding.  Those types of experiences gave Daniel a good idea of what life as a grad student would really be like.