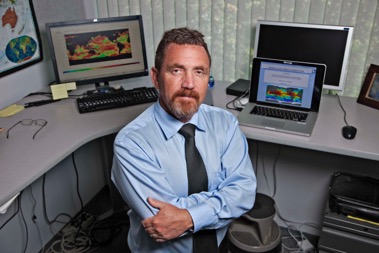 Fingerprint research seeks to improve understanding of the nature and causes of climate change. The basic strategy is to search for model-predicted patterns of climate change (“fingerprints”) in observed climate records. Fingerprinting exploits the fact that individual influences on climate have unique signatures. These unique features are clearer in detailed patterns of climate change than in global-mean climate information. Fingerprint methods are a powerful tool for separating human and natural climate-change signals. The results of fingerprint research provide scientific support for findings of a “discernible human influence” on global climate.

Twenty years ago, at the time of publication of the Second Assessment Report of the Intergovernmental Panel on Climate Change (IPCC), most fingerprint studies relied on surface temperature. Critics of this work argued that a human-caused fingerprint should be identifiable in many different aspects of the climate system – not in surface thermometer records alone. Fingerprint researchers responded to this justifiable criticism by moving beyond early “temperature only” studies, interrogating modeled and observed changes in rainfall, water vapor, river runoff, snowpack depth, atmospheric circulation, salinity, and many other climate variables. The message of this body of work is that human-caused fingerprints are ubiquitous in the climate system.

The Yanai lecture affords an opportunity to look back at the scientific and personal lessons learned from over two decades of efforts to fingerprint the climate system – and to tell the story of how the scientific community identified a human-caused warming signal.

Ben Santer is an atmospheric scientist at Lawrence Livermore National Laboratory (LLNL). His research focuses on such topics as climate model evaluation, the use of statistical methods in climate science, and identification of natural and anthropogenic “fingerprints” in observed climate records. Santer’s early research on the climatic effects of combined changes in greenhouse gases and sulfate aerosols contributed to the historic “discernible human influence” conclusion of the 1995 Report by the Intergovernmental Panel on Climate Change (IPCC). His recent work has attempted to identify anthropogenic fingerprints in a number of different climate variables, such as tropopause height, atmospheric water vapor, the temperature of the stratosphere and troposphere, ocean heat content, and ocean surface temperatures in hurricane formation regions.

Santer holds a Ph.D. in Climatology from the University of East Anglia, England. After completion of his Ph.D. in 1987, he spent five years at the Max-Planck Institute for Meteorology in Germany, where he worked on the development and application of climate fingerprinting methods. In 1992, Santer joined LLNL’s Program for Climate Model Diagnosis and Intercomparison.

Santer served as convening lead author of the climate-change detection and attribution chapter of the 1995 IPCC report. His awards include the Norbert Gerbier–MUMM International Award (1998), a MacArthur Fellowship (1998), the U.S. Department of Energy’s E.O. Lawrence Award (2002), a Distinguished Scientist Fellowship from the U.S. Dept. of Energy, Office of Biological and Environmental Research (2005), a Fellowship of the American Geophysical Union (2011), and membership in the U.S. National Academy of Sciences (2011). He recently visited the Juneau Icefield in Alaska, and enjoys rock-climbing, mountaineering, and exploring the beautiful state of California with his wife Kris.