The California Current hosts diverse and valuable fish communities shaped by bottom-up and top-down processes, transport by currents, and active swimming. However, the interaction of these processes is poorly understood. Here, we investigate these interactions in a regional configuration of the APex ECOSystem Model (APECOSM) in the California Current. APECOSM is a mechanistic model of the pelagic food-web that resolves predator-prey interactions, fish swimming, and transport by currents. Forced by an eddy-resolving representation of ocean currents and lower trophic levels, the model reproduces observed fish biomass from fisheries-independent trawls, and the observed succession from small to large sizes moving from the coast to the open ocean. We show that, in the model, the cross-shore variation emerges from a combination of: (1) passive offshore advection by the mean surface current, (2) active swimming towards coastal productive regions, and (3) mesoscale heterogeneity that reduces the ability of organisms to return to coastal waters. The model also helps explain the lower biomass and typically smaller size of surface-dwelling species compared to mid-water migrating species by the temperature dependence of metabolism. This work shows the first successful implementation of a regional size-structured fish model, and highlights the importance of fish movement and currents in shaping the pelagic food-web of the California Current. 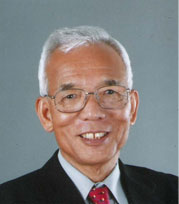 One of the most powerful tools for studying global warming is climate models. It has evolved from the dynamical model of numerical weather prediction that has become indispensable for daily weather forecasting. Using high speed, electronic computer, climate model simulates the state of the coupled atmosphere-ocean-land system based upon the laws of physics. It has been very useful as virtual laboratory for exploring the physical mechanism of climate change. In this presentation, I review the modeling studies of global warming, in which I have participated. For example, I show that climate models have successfully simulated many salient features of global climate change that has occurred during the last several decades. The talk will conclude with the discussion of the predicted change of the global water cycle that is likely to exert far-reaching impact upon the water availability of the world.

Syukuro "Suki" Manabe is a Japanese meteorologist and climatologist who earned his Ph.D. in Tokyo University and currently serves as Senior Meteorologist and visiting research collaborator at Princeton University. He is known for developing the use of general circulation models and using computers to simulate global climate change and natural climate variations. His various scientific achievements include demonstrating effects of increased carbon dioxide concentrations into the atmosphere, pioneering climate simulations with coupled ocean and atmosphere models, and researching greenhouse gas concentrations effect on the Earth's climate.

These achievements have earned him many awards, including the Rossby Research Medal in 1992 from American Meteorological Society and the Bowie Medal in 2010 from the American Geophysical Union. His prizes include the Blue Planet Prize from the Asahi Glass Foundation and the Volvo Environment Prize. He serves as a member of the US National Academy of Sciences since 1990.