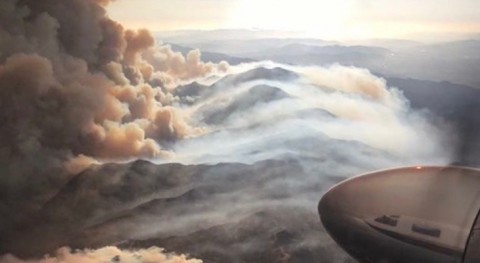 Sundowner winds are late afternoon-to-early morning episodes of offshore, northerly gusty downslope winds frequently observed in the southern slopes of the Santa Ynez Mountains (SYM) in southern California, USA. Significant cross mountain flow over the Santa Ynez Mountains is necessary, such that the prevailing flow in the vicinity of Santa Barbara is offshore (northerly), eroding (or displacing) the marine boundary layer. Sundowners typically peak after sunset (reason for the name), are spatially non-uniform and can have significant impacts on wildfire behavior. In this seminar, I will present a 30-yr high spatiotemporal downscaling dataset performed with the WRF model (1 km horizontal grid spacing, hourly, 1 September 1987 to 31 August 2017). A novel approach is used to investigate the climatology of Sundowner winds. Combined empirical orthogonal functions are employed to objectively characterize the variability of surface winds. It is shown that the first two modes (EOF-1, EOF-2) represent 60.5% of the total variance (45.3% and 15.21%, respectively). EOF-1 is characterized by large loadings in the western part of the domain and captures the intense winds in the western SYM and coastal jet. In contrast, EOF-2 represents strong winds near Gaviota and intense downslope winds in the eastern SYM (i.e., near Santa Barbara and Montecito cities) and San Rafael Mountains. The hourly frequency distributions of the first two time coefficients are used to identify the occurrence of significant downslope winds in the southern slopes of the SYM. Three types of Sundowner wind regimes are found depending on how winds project onto EOF-1 and EOF-2. I will then conclude the seminar by discussing other research activities associated with Sundowner winds as well as wildfire research in California.