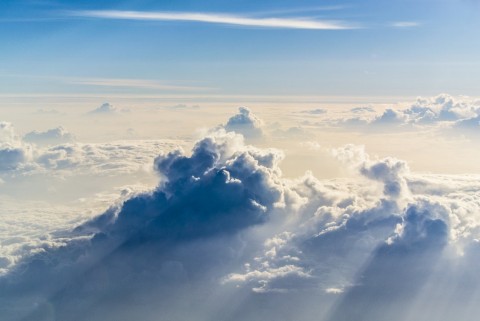 Cirrus clouds have a net warming effect on the atmosphere and cover about 30% of the Earth’s area. Aerosol particles initiate ice formation in the upper troposphere through modes of action that include homogeneous freezing of solution droplets, heterogeneous nucleation on solid particles immersed in a solution, and deposition nucleation of vapor onto solid particles. However, the efficacy with which particles act to form cirrus particles in a model depends on the representation of updrafts. Here, we use a representation of updrafts based on observations of gravity waves, and follow ice formation/evaporation during both updrafts and downdrafts.  We examine the possible change in ice number concentration from anthropogenic soot originating from surface sources of fossil fuel and biomass burning and from aircraft particles that have previously formed ice in contrails. Results show that fossil fuel and biomass burning soot aerosols exert a radiative forcing of − 0.15±0.02 Wm-2 while aircraft aerosols that have been pre-activated within contrails exert a forcing of  -0.20±0.06 Wm−2. We will also present new results of the forcing associated with secondary organic aerosols. Our estimates of forcing depend on the fraction of dust particles that act as heterogeneous ice nuclei. The magnitude of the forcing in cirrus clouds can be comparable to the forcing exerted by anthropogenic aerosols on warm clouds. This assessment could therefore support climate models with high sensitivity to greenhouse gas forcing, while still allowing the models to fit the overall historical temperature change.