Aradhna Tripati wins AGU’s Willi Dansgaard Award and Ambassador Award, and is elected Fellow of the California Academy of Sciences 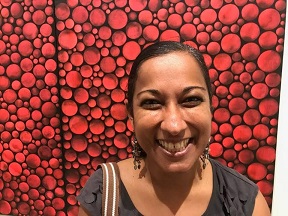 AOS Associate Professor and Founding Director of Center for Diverse Leadership in Science Aradhna Tripati has been honored twice this year by the American Geophysical Union (AGU), receiving the Willi Dansgaard Award and the Ambassador Award!

The Willi Dansgaard Award is presented annually and recognizes significant contributions to the fields of paleoceanography or paleoclimatology from a mid-career scientist within eight to 20 years of receiving their Ph.D. Named in honor of Dr. Willi Dansgaard, a paleoclimate pioneer, especially regarding modern water isotope studies, this award is presented at the Paleoceanography and Paleoclimatology section event during the AGU Fall Meeting.

The Ambassador Award honors individuals whose achievements extend beyond those recognized by traditional scientific discipline awards and grants fellowship to AGU. Dr. Tripati is receiving the award "in recognition of their outstanding contributions to one or more of the following areas: societal impact, service to the Earth and space community, scientific leadership, and promotion of talent/career pool."